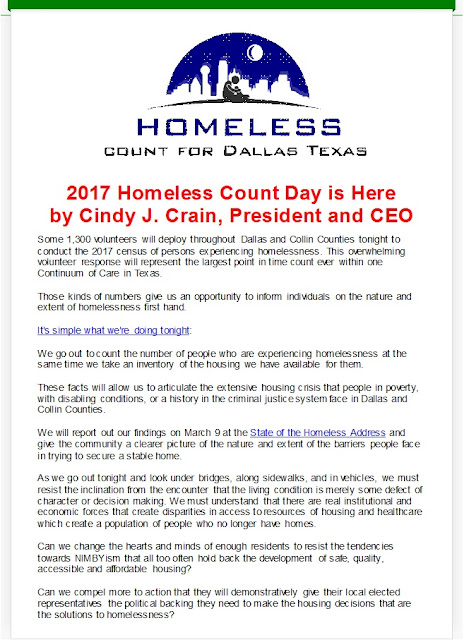 Posted by Larry James at 9:55 AM No comments:

Living in a poor neighborhood changes everything about your life

In 1940, a white developer wanted to build a neighborhood in Detroit.

So he asked the US Federal Housing Administration to back a loan. The FHA, which was created just six years earlier to help middle-class families buy homes, said no because the development was too close to an "inharmonious" racial group.

Read and view more  here.
Posted by Larry James at 4:52 AM No comments:

Housing, the place to begin

Posted by Larry James at 5:32 AM No comments:

Here’s to the Crazy Ones

Here’s to the crazy ones.
The misfits. The rebels. The troublemakers.
The round pegs in the square holes.
The ones who see things differently.
They’re not fond of rules.
And they have no respect for the status quo.

You can praise them, disagree with them, quote them,
disbelieve them, glorify or vilify them.
About the only thing you can’t do is ignore them.
Because they change things.
They invent. They imagine.
They heal. They explore. They create. They inspire.
They push the human race forward.
Maybe they have to be crazy.

How else can you stare at an empty canvas and see a work of art?
Or sit in silence and hear a song that’s never been written?
Or gaze at a red planet and see a laboratory on wheels?
While some may see them as the crazy ones, we see genius.

Because the people who are crazy enough to think they can change the world,
are the ones who do.


Jack Kerouac
Posted by Larry James at 9:30 AM No comments:

Email ThisBlogThis!Share to TwitterShare to FacebookShare to Pinterest
Labels: challenging the status quo, community and creativity, outside the box, revolutionaries 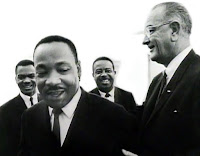 The church must be reminded that it is not the master or the servant of the state, but rather the conscience of the state. It must be the guide and the critic of the state, and never its tool. If the church does not recapture its prophetic zeal, it will become an irrelevant social club without moral or spiritual authority. If the church does not participate actively in the struggle for peace and for economic and racial justice, it will forfeit the loyalty of millions and cause men everywhere to say that it has atrophied its will. But if the church will free itself from the shackles of a deadening status quo, and, recovering its great historic mission, will speak and act fearlessly and insistently in terms of justice and peace, it will enkindle the imagination of mankind and fire the souls of men, imbuing them with a glowing and ardent love for truth, justice, and peace. Men far and near will know the church as a great fellowship of love that provides light and bread for lonely travelers at midnight.

Posted by Larry James at 8:51 AM No comments:

My friend Terry, the entrepreneur

After weeks of above average temperatures in Dallas, the cold snap whipped us hard last Tuesday night.  I mean, from over 70 to below 40, that's a real snap!

Upon arriving at my office Wednesday morning, I found this note taped to my door. 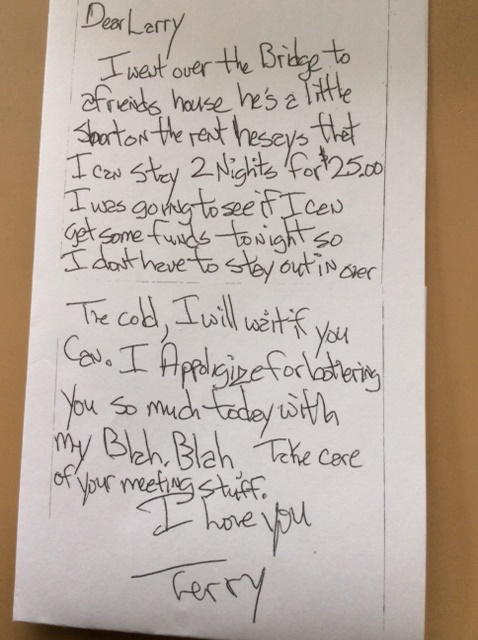 Terry and I have been friends for a few years.  We met on the street when he approached me offering to do a couple of card tricks.  I obliged with a $5 tip.  He wowed me and others who gathered with his 1/2 magic, 1/2 stand up routine.

He's never been much of a beggar or panhandler with me.  Too proud and independent.  Only when really pressed to the edges does he ask for help of any kind.  Last Tuesday evening at the end of the day, he stopped to see me to ask for special assistance as the note reflects.

I was busy when he came in, and he was gone when I got free.

This note shook me a bit, as I thought through what the night must have been like for him outside.  I had seen him the day before, and finally convinced him to make an appointment to see our staff who could really help him head in a new direction.  We talked several times that day, actually to the point of distraction.

As I worried about him on Wednesday morning, he showed up for a cup of coffee!  It was a relief to see him.

I asked him if he had made the arrangement with his friend to stay in out of the weather.  He told me that he had solved the problem himself.  He then went on to tell me how he had found shelter back of a restaurant dumpster.  He went into great detail about how he used scrap lumber and tin siding to construct a warm little home that blocked the wind that forced him to bed down around 9 p.m.

"That little house made me happy," he told me.  "It was just too cold to stay up, so I went to bed when I finished building it.  I got a good night's sleep, Larry!" he exclaimed.

When I commented about my amazement at his creativity and toughness, he simply replied, "Well, Larry, you know me; I'm an entrepreneur at heart."

Well, Terry, that's one way to look at it for sure.

Just one snapshot from a guy I count as a friend. . .and, we're working on finding real housing for him.
Posted by Larry James at 7:00 AM No comments:

Safe Conversations: You Gotta See This!

The power of free trade

Email ThisBlogThis!Share to TwitterShare to FacebookShare to Pinterest
Labels: commerce and community, one world economy, peace and prosperity, trade and community, war and poverty

Email ThisBlogThis!Share to TwitterShare to FacebookShare to Pinterest
Labels: civil disobedience, community and justice, homelessness in Ireland, protest for justice 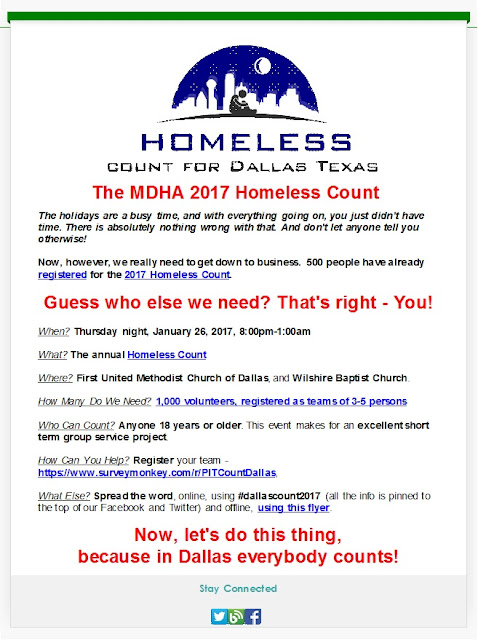 Posted by Larry James at 4:09 PM No comments:

Email ThisBlogThis!Share to TwitterShare to FacebookShare to Pinterest
Labels: MDHA, Point in time census for homeless

Take a bias test here.
Posted by Larry James at 1:25 PM No comments: