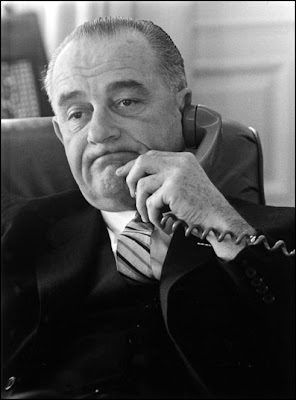 I'm reading Alice Schroeder's fascinating biography of Warren Buffet (The Snowball: Warren Buffett and the Business of Life). To benefit Central Dallas Ministries, you can buy it through the Amazon.com link below and to the right!

Warren's father, Howard, served in the U. S. Congress during the mid/late 1940s as one of the representatives from Nebraska. He was there during the time that Sam Rayburn served, some would say ruled, as speaker of the House.

Sam was from Texas.

Sam got me thinking about Lyndon Johnson.

And, low and behold, I open The Dallas Morning News Thursday morning and there is a Carl Leubsdorf essay about President Johnson dealing with his contribution to civic advancement in the U. S.

Interesting that President-elect Obama was chosen to serve in the nation's highest office during the 100th anniversary year of Johnson's birth. Leubsdorf's essay is worth reading.

I grew up around lots of Johnson-haters, both young (the war in Vietnam) and old (social policy, especially civil rights), but I'm thinking grateful thoughts this Thanksgiving season for LBJ.
I'm sure you have an opinion. . . .

A wonderful reminder about the impact of a remarkable man. Among the most important comments was the note about how Johnson's presidency is the "invisible" one because of the cloud of the Vietnam war, whose shadow darkens much of the brilliance of Johnson's presidency.

Let us hope that the ending of the Afghanistan and Iraq wars do not similarly cloud over the legacy that Obama will surely build for himself.

Thanks for continuing to challenge us, Larry.

LBJ's dirty tricks to win the 1964 election are some of the worst in political history.

Anon 1:09, actually, my grandfather would disagree with you. The dirtiest tricks LBJ ever pulled took place in the 1948 Senatorial election--primary--when he defeated the popular Gov. Coke Stevenson to win the U. S. Senate seat by just 87 votes! But, dirty tricks, actual and supposed, aside, my point was to celebrate the accomplishments of the man what advanced American democracy in spite of his shortcomings.

One of my earliest memories is of my parents getting me to stand up before their friends, and tell a bad LBJ joke. Until I was about 13, I assumed Democrats were all evil people working to destroy America.

Funny thing is LBJ famously said after signing civil rights legislation, "We've lost the south for a generation." Looks more like 2 to me.

"I assumed all Democrats were all evil people working to destroy America."

When you consider the likes of Barney Frank, Harry Reid, Nancy Pelosi, Chris Dodd, Barack Obama and others you might not be far wrong.

Too late eight years of Bush and six years of Republican Congressional rule has left nothing for Democrats to destroy!

Does the vitriol really help? Does it make us feel better? My point was to spotlight the achievements of a president who stood up for civil rights, knowing that he would create an amazing political realignment that would likely hurt his party. The point here is advancement in civil rights. Chris, please tell me how that is evil? Tell me how that destroys America?