The danger of demagoguery 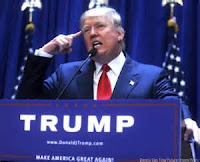 demagogue--a political leader who seeks support by appealing to popular passions and prejudices.

demagoguery-- an appeal to people that plays on their emotions and prejudices rather than on their rational side;  a manipulative approach — often associated with dictators and sleazy politicians — that appeals to the worst nature of people; demagoguery isn't based on reason, issues, and doing the right thing; it's based on stirring up fear and hatred to control people; for example, a politician who stirs up a fear of immigrants to distract from other issues is using demagoguery; one of the most negative aspects of politics, but it's also one that's all too common.

Trump is much, much more than a clown.  He is a dangerous man.

His statements on Mexico, on immigrants from Mexico and his harsh, hateful judgmental spirit appears to be working with some voters, as he fans the fire of xenophobia and the worst of our heritage as a nation.

Possibly the irony of all ironies has to do with the fact that the United States, a nation of immigrants, has always witnessed vociferous, anti-immigrant spokespersons, usually self-appointed, voices like that of Mr. Trump.

He is short-sighted and inexperienced at best.  I won't speak to the "at worst" here.

Simply put, he is dead wrong.

Try doing Dallas without immigrants from Mexico.  We all benefit from the labor of hard working Mexican immigrants.  We exploit them and their legal status to our benefit.  This ugly truth is why we have not achieved comprehensive immigration reform:  it is not in the self-interest of people like Mr. Trump to pursue a fair, enlightened immigration policy.  So, he makes speeches that appeal to crowds of angry people.

Check his "facts" and you'll find nothing to back up his outlandish statements.

To be honest, he is talking about friends of mine.  I find him most offensive and vulgar.

Young and old, rich and poor, the folks "the Donald" refers to have as much right to be in this nation as any of the rest of us.  In fact, a stronger case can be made that their claim to the rights to be here, (especially in Texas) go all the way back to the Treaty of Hidalgo 1848 and its almost immediate violation by the United States.

My thoughts today are more in line with Governor Chris Christie (R-NJ):  "Take your seat, sir, and close your mouth."

You know, it really is about my dear friends.

Trump is telling the truth. Perhaps if one of your loved ones was murdured by am illegal you would think differently

Anon 6:50, what you say is illogical and unfair. Because one undocumented person commits a crime does not mean that all do or even a few. Your thinking drives our racist, xenophobic attitudes.

It's true. Trump is worse than a clown. He's a really bad person with really bad ideas who would be really bad for this country. And when he's called on his s*#t he just doubles down. I hope he exits the race soon. He's embarrassing the country.