My friend, Obie Weathers, lives on Texas Death Row.  We've been exchanging letters for about a year now.  Texas sent him to Death Row at the age of 20.  He's 34 today.  Most of his days have been served in "administrative lockdown," which means he spends 23 hours a day in a cell by himself, as do his fellow inmates.  Recently, I visited him in Livingston, Texas, home of Texas Death Row.  What follows is his latest letter to me.  It moves me to read his letters because after 14 years Obie is a different man than when he arrived a teenager.  Make what you will of this man's words.  I find that it's impossible not to love him. 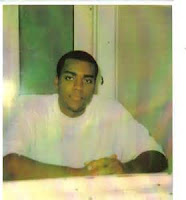 One afternoon while practicing a mindfulness exercise whereby one allows their ears to rove, consciously making notes of each object the ears touch without becoming fixated on any object in particular, my mind became entangled in the jangling laughter of a fellow prisoner.
This laughter snagged me.  Something about it. . .amid the cacophony of the afternoon in this place of solitary existence where one's only mate is the silent death sentence and the e solitaires in their solitary cells stand at the cell's doors daily, all day, fervently and unconsciously (I surmise) attempting to ward off their mate's shadow like witch doctors, shamans, raising an incantation composed of jive talk, tall tale-tellings, bet calling, cat calling, the mad rants of mad men and recaps of late night's ball games; and the mind-numbingness with their crash slamming of metal gates into their metal frames, doors and cell doors opening and closing, slamming, crashing, screaming for more:  "Roll 44!  Roll 44!"
Something about this laughter made me aware of the shadow looming over me.  I've heard this  laughter before, countless times, and have thought deeply on the way it seems at once maniacal, bursting defensively from a deep place where it remains wrapped protectively around some last inner  jewel and always ready to spring uncontrollably, obsessively and deceptively cool though full of pain.

This laughter is common here: this is the laugher of the hopeless; of the one resigned to fate, but, who still tries to fan from their presence the consuming shadow with laughter.
This day when I heard the laugher coming from a guy I know well and care for, I felt a deep pain, an empathy.  I felt that Perry's laughter was my own, that  his experience mine, so I began to explore my thoughts and feelings with in the space of poetic verse.  And what follows isn't a poem about a single guy on Texas Death Row waiting to die, it is s poem about all the people on Death Row waiting.
A Poem without a Happy Ending
I
(Two condemned prisoners talking)
"He's expecting a date, did you know?"
"Yeah, man; I heard."
II
Lost in laughter
so sad
Mad from despair
Stare into his eyes
He's not there
Hulled-out
I hear his echo
Retreating to the distance
History
His story is no more than the rest of ours
Elementary dreams
Junior High minds
Stunted by high school highs
We enter behind bars
Boys
Becoming men bereft of experience to become men
So than, what are we
But the problems we started with
Because we can't get past them
Like these bars
Can't see the stars because of them
So the nite is our life
Blind men
We say we see
But these tears are too thick
Keloids crisscross neuro-pathways
Stopping synapse traffic
So some of us steer our heads into those concrete walls
Prefrontal cortex still ain't sped up to the contex
Stuck in a vortex
And swimming with the current.﻿
﻿
Posted by Larry James at 4:48 AM