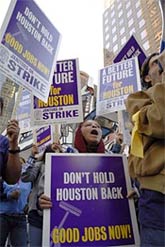 Janitors in Houston, Texas ended their month-long strike last week after agreeing to a new contract with the city's major cleaning firms that will deliver wage increases of almost 50% over the next two years. Just as important is the agreement's provision to provide the workers health coverage.

Organizing under the umbrella of the Service Employees International Union, 5,300 janitors celebrated a new labor agreement that will see their hourly wages move up from $5.25 per hour to $7.75 by January 1, 2009.

Employers also agreed to give their employees more daily hours, increasing the typical shift from four hours to six hours. For a 30-hour work week, an employee will earn around $12,000 annually when the agreement is fully realized.

The janitors rightfully celebrated their success.

No doubt, most of these workers have other jobs, as do their spouses and other family members.

Workers coming together to organize for their rights in the workplace and in the larger economy is a good sign of renewed community hard at work.

And watch it, over the next two years none of the major cleaning firms will go out of business.
Posted by Larry James at 6:15 AM

Wal-Mart workers should join and take this action! When will consumer greed realize how it is hurting the country????