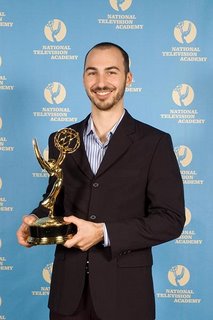 Matt Hopkins and his group at Viacom in New York City just won an Emmy!

Matt is the son of my best friend, Dan Hopkins.

For years Dan and I have been running around our neighborhoods and at our common meeting place these days, White Rock Lake. Over all those miles, a common topic of conversation across the years has been our children.

To say that Dan and all of us who know Matt are pretty proud would be the understatement of the century today!

Matt works in marketing for Viacom and he led the team that produced the Public Service Announcments on HIV/AIDS that won this prestigious award this year.

Matt blows the top off when it comes to talent and smarts. He graduated from Boston University with a degree in performing arts or theater--I'm not sure what the folks at BU label it.

Suffice it to say, Matt is a rare talent. He has produced several original plays off Broadway, his latest receiving rave reviews from the New York critics, as well as another important award, the name of which I cannot recall! I had the privilege of attending a play he produced and performed in a couple of years ago and it was amazing--funny and brilliant!