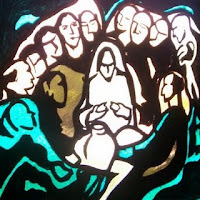 Reading the Gospel of St. Luke challenges me every time I open myself to its message.  Again and again Luke shows just how much Jesus said about poverty and the suffering of the impoverished.  He calls those who want to follow him to take poverty seriously and to respond to it with generosity, compassion and seriousness.  He challenges followers to divest themselves of their wealth and "lay up treasure in heaven," seeming to indicate that assisting those trapped in poverty will result in some eternal return on investment.  On at least one occasion he counseled a very rich many to sell all he had, give his assets to the poor and then come and follow.

Luke's second volume, Acts of the Apostles, reveals that the earliest Christian community got Jesus' message as members sold possessions and gave to the communal fund that wiped poverty out among his early followers.

Most of the time though, I don't embrace poverty as a spiritual discipline that both assists the poor more completely and witnesses to the evil of impoverishment.  Few contemporary expressions or understandings of the Christian faith call followers to intentionally embrace poverty as a style of lfie.

Poverty is an act of love and liberation.  It has a redemptive values.  If the ultimate cause of human exploitation and alienation is selfishness, the deepest reason for voluntary poverty is love of neighbor.  Christian poverty has meaning only as a commitment of solidarity with the poor, with those who suffer misery and injustice.  The commitment is to witness to the evil which has resulted from sin and is a breach of communion.  It is not a question of idealizing poverty, but rather of taking it on as it is--an evil--to protest against it and to struggle to abolish it.  As Ricoeur says, you cannot really be with the poor unless you are struggling against poverty.  Because of this solidarity--which must manifest itself in specific action, a style of life, a break with one's social class--one can also help the poor and exploitated to become aware of their exploitation and seek liberation from it.  Christian poverty, an expression of love, is solidarity with the poor and is a protest against poverty.  This is the concrete, contemporary meaning of the witness of poverty.  It is a poverty lived not for its own sake, but rather as an authentic imitation of Christ; it is a poverty which means taking on the sinful human condition to liberate humankind from sin and all its consequences. (page 172)


Gustavo Gutierrez
Theology of Liberation﻿
Posted by Larry James at 6:00 AM

A "preunderstanding" of a preferential option for the poor is the very heart of liberation hermeneutics. Liberationists argue that "the reader of the Bible must deliberately choose his eyeglasses before he begins reading, and that the 'preferential option for the poor' means just that - a deliberate bias or perspective. Without this, the true meaning cannot be known. We must discard our North Atlantic lenses, we are told, and put on Third World ones - we must lay aside the eyeglasses of the rich to use those of the poor."
W. Dayton Roberts, "Liberation Theologies," Christianity Today, 17 May 1985, 15.

wealth - what of it – shall it be a weight
that drags the spine to servitude
unseen
a crimson arc beneath the coat
?

lay it now against the altar —
leave it - it is mine!
leave it –

Just a word about hermaneutics and the notion of "preunderstanding." Everyone brings one to the text of the Bible, everyone. Calvinists bring their theological/social/economic worldview. Restorationists/primitivists bring theirs. In the denomination of my parents, the Campbells brought their fascination with the US Constitution and used its methodology to make sense of the Bible and how it should be applied to a divided church. We bring who we are to the text, and we bring what we see, experience and believe to be true from our life experiences, from our understandings of history, from our social context, etc. Every serious student of the Bible and of interpretation understands this. Gutierrez and others like him make their worldview very clear as they approach the text. Are they always correct? No. No one can make such a claim. Do they have a wealth of scriptural evidence to substantiate their basic view and enterprise? Yes, any objective person would have to admit that. Cut out all of the texts that relate to poverty, injustice, oppression and relief from same and you'll be holding a shreded book in your hand that makes no sense whatsoever. From the Exodus to the Epistle of James and on to Revelation, the clear, convicting message is there for us to read, apply and honor. Laying up treasure in heaven must involve a faithful response to the poor and the rejected. Sorry, it's in the Book!

Larry, you forget the purity of your heritage. In the church you grew up with, there was no interpretation, no theology, no "preunderstandings." The folks just read the Bible, and the Bible always "means what it says, and says what it means."

All those other approaches to Scripture were against the clear and pure message of Scripture. "Back to the Bible" is the only way.

(Needless to say, I agree with you. But, the folks who you describe from your background would never admit that they allowed any "preunderstandings" to shape their thinking... They were simply and only and always following the Bible...)

(And by the way, if you read Luke, and plenty of other portions of Scripture, it is tough to miss some hint of "preference" for the poor...)

Foundationally, the liberation hermeneutic (which makes praxis the first step, and theology the second) is completely without any controlling exegetical criteria. Vernon C. Grounds is right when he says that "there is no exegetical magic by which new meanings can without limit be conjured out of the Bible under the illuminating creativity of new situations."

Anon 10:27, praxis always goes before theology unless your preunderstanding demands otherwise, as is the case, with all due respect, to Mr. Grounds. God liberated the Israelites under the leadership of Moses. Then followed the theology that explained that, etc. throughout the biblical narrative. God acts. Humanity grapples with understanding. The only way this is not true is if one is willing to admit that God no longer acts and thus God's current movement has no bearing on how theology is formed because God's holy, powerful praxis is over. I refuse to accept that preunderstanding!

Using methodologies such as Gutierrez's, liberationists interpret sin not primarily from an individual, private perspective, but from a social and economic perspective. Gutierrez explains that "sin is not considered as an individual, private, or merely interior reality. Sin is regarded as a social, historical fact, the absence of brotherhood and love in relationships among men."
(Gustavo Gutierrez, A Theology of Liberation (Maryknoll, NY: Orbis, 1971), 175.)

Scripture is clear that we have a God-appointed responsibility to take whatever steps we can to help the poor. Yet, at the same time, we must insist that ultimately the transformation of any society depends on the prior transformation of the individuals that make up that society. This is the Christian counterpart to "dependency theory." The revolution so earnestly sought in society will best be accomplished as greater numbers of people in that society experience the revolution of new birth and the ongoing renewal of life in Christ.

y'all do know that the Bible is a book that we have gotten thru hundreds of translations? oddly enough, the KJV is not the inspired word of God. too often we make law out of that which we do not comprehend.

Perhaps you use the James Cone translation?

Those who want to "personalize" religion would be wise to look at Christianity's roots in Deuteronomy. Communal responsibility for sin was just as much a factor as individual sin. But in the days of personalized religion, all we need is a relationship with a cuddly-Jesus and we can forget about the ways our lives intersect with our brothers and sisters.

LJ, at what point did you leave the denomination of your parents and what did you replace it with?

What is emerging in these threads is a sterile, secular faith. A little jesus, municipal church, a political agenda. How small. But on the upside, nothing to confess, unless you're rich!