A report from "The Lookout," a Yahoo news blog: a problem possibly more toublesome than the national debt. . .

The Great Recession and the slump that followed have triggered a jobs crisis that's been making headlines since before President Obama was in office, and that will likely be with us for years. But the American economy is also plagued by a less-noted, but just as serious, problem: Simply put, over the last 30 years, the gap between rich and poor has widened into a chasm.

Gradual developments like this don't typically lend themselves to news coverage. But Mother Jones magazine has crunched the data on inequality, and put together a group of stunning new charts. Taken together, they offer a dramatic visual illustration of who's doing well and who's doing badly in modern America.

This chart shows that the poorest 90 percent of Americans make an average of $31,244 a year, while the top 1 percent make over $1.1 million: 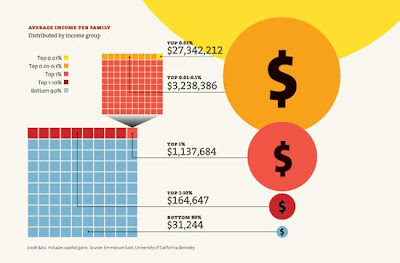 According to this chart, most income groups have barely grown richer since 1979. But the top 1 percent has seen its income nearly quadruple: 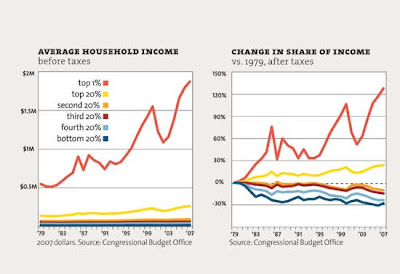 And this chart suggests most Americans have little idea of just how unequal income distribution is. And that they'd like things to be divvied up a lot more equitably:

To see the rest of these fascinating charts, click on over to Mother Jones.

[Is it just me, or is this socially unsustainable?  LJ]
Posted by Larry James at 6:00 AM

Astonishing statistics that don't bode well for the future of our country. I pass on this great quote which sums it up.

"Why is a 3% tax increase on the richest considered 'socialism' but a 14% pay cut on the middle class is 'doing your part'?" - Linda Zambanini

And the lower class don't even count.

The gospel according to Michael Moore says that the money of rich people are not there's but "ours". How do you feel about his statement? Who's keeping him from redistributing his millions?

The gospel according to Michael Moore says that the money of rich people are not there's but "ours". How do you feel about his statement? Who's keeping him from redistributing his millions?

What a great country! A fat socialist can still function in the capitalist system while at the same time saying the money he makes is not really his.

Oops, I realize the word is "theirs."

Let me get this straight- those that pay no taxes continue their left leaning ways based primarily on government subsidies provided by increasing taxes on others? Where is the "social justice" in this"
Buying votes is nothing new, but the "warm and loving compassion" of those who pander to and promote such intellectual garbage is despicable.
Its not just socialism, its communist socialism.It didn't work in the Soviet Union, and it won't work here!

If you google the International Socialist Organization you will find it sounds a lot like Larry's blog.

and the Hebrew prophet, Amos, not to mention the Torah. . .