In recognition of "Opening Day 2011," enjoy the following reflection on the importance and transcendence of the national passtime! 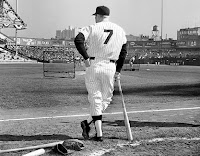 Take Me Out to the Ball Game

When the game was over, I stood with a bunch of kids outside Yankee Stadium, waiting to get autographs. The Indians’ Bob Feller burst through the door, a losing-pitcher’s scowl on his face, and plowed through us, muttering his irritation. Offended, I reported it to my dad, who suggested I write a letter of complaint to the New York Times. I was 10, and it was 1951. I can’t recall if the Times ran my letter, or even if I mailed it. But the incident suggests what an innocent time that was, long before big money divided fans from the stars, when players were expected to sign baseballs and chat with kids in the street.

Yet even now, when a so-so reliever costs $5 million and the stadium serves quiche, baseball retains most of its innocence. Here we are, older and jaded, and still giddy as the season begins. Nothing in American life excites us this way. Of course, my “we” and “us” assume everyone loves the game, but why not? Baseball is America. It’s competitive. It’s green. And it’s such a well-made invention.

Read more here.
Posted by Larry James at 6:00 AM