Tax Fairness
Fairness of a tax system can be judged by comparing the percentage of income different households pay in taxes. In a state with a fair tax system, households with higher incomes, who can afford to pay a larger percentage of their income in taxes, pay more.

Texas has the fifth most regressive state and local tax system of the 50 states. 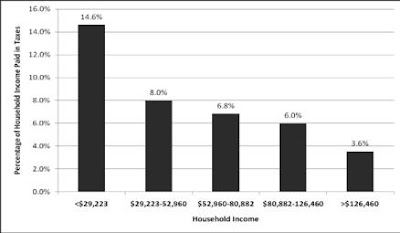 [This report provided by the Center for Public Policy Priorities.  To read the entire, much more extensive report click here.]
Posted by Larry James at 6:00 AM

The households with the highest income pay the lowest percentage for any of the essentials, food, shelter, clothing, unless, of course, they live way beyond their means. For example, if you make $100,000 a year, you will still need the same amount of food as a person who makes $20,000 but it will be a lower percent of your overall income.

The $20K earner pays a higher % of income for food, taxes and all. Wealthier should pay higher % of their income to support needed community services used by all.

Not in Texas, where there is no income tax. That's why the State's tax system is regressive. It imposes taxes only on expenditures, not income. So if you make way more than you need to spend, and have the luxury to invest/save it instead, you effectively avoid any state taxes.

The percentage paid on a consumption tax is not relevant unless you are concerned with income redistribution. The total dollars paid into the system is important! The poor (now around 50% of the country -if categorized by the amount of taxes paid) pay 0% federal income tax. Where is your communist liberation theology loving heart on this?