Lights back on in New Orleans. . . 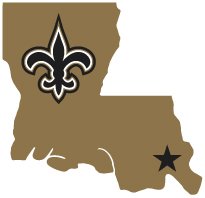 For the first time in almost two years the lights burned brightly last Monday night at the New Orleans Superdome. U2 and Green Day showed up with thousands of fans and citizens of the troubled city.

About a year ago we were all thinking hard and arguing passionately about the city of New Orleans in the aftermath of Katrina.

At last football fans, in person and via ESPN's Monday Night Football, converged on the city and the Superdome for the game between the over achieving New Orleans Saints and the solid Atlanta Falcons.

The Saints prevailed in the game 23 to 3. I loved the outcome!

When we lived in New Orleans, I joined the ranks of die-hard Saints fans, even when we referred to them as the "Ain'ts." We were there five years--great years.

Hank Stram coached the team. I remember very well leading the team in chapel services prior to a game with the Philadelphia Eagles. As I recall, my prayers didn't help much that day. But, I can tell you it was thrilling to me, a young, 25-year-old minister just to be in the house with the team! I have a Saints helmet hanging in my office today, even here in Cowboy country.

During the off season, we would run into the Archie Manning family--including Peyton and Eli when they were just little fellows--at a local cafeteria on Sundays after church.

Throughout the game it was clear that the fans carried the team with their unrelenting heart and soul. The Falcons should have won the game, but the fans simply would not allow it. It was amazing to watch and listen.

The renewal of the sports arena has given the people of New Orleans hope and a common rallying point. Every seat in the building has been sold out for the entire 2006 Saints home schedule. Eat your heart out, Jerry Jones!

Clearly, the Saints are back!

I wish I could say the same about the city.

More than a year after the Katrina tragedy the city has no comprehensive plan for rebuilding the thousands of homes lost in the storm. Those of us who have walked the neighborhoods can't get the images of complete devastation out of our minds or our dreams. 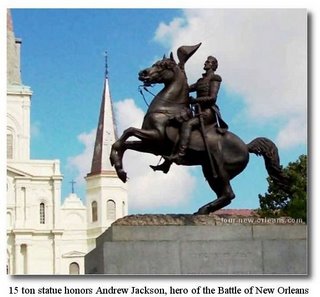 The Superdome has been restored, thanks to an investment of over $185 million dollars.

Monday night we all watched with gratitude.

What has happened to the Superdome sports arena needs to spread out across the rest of the city and the entire region.

But, it cannot happen, it will not happen without a national commitment to rebuild the city of New Orleans.

Where is the leadership?

Where is a reprise of a Marshall Plan-like approach to renewing this important, but devastated American city?

As I see it, we must keep asking and asking until we receive a satisfactory answer.

As Spike Lee said at halftime Monday evening, "it ain't right yet."

Three or four hours at a wonderful community event and then back to the FEMA trailer just doesn't sound like the best we can do. What do you think?

Surely we have not come to the place in our national civic life where we simply allow a great city to disappear, have we?

Every major urban area in America should be watching and listening for an answer, a national answer.
Posted by Larry James at 11:47 AM

According to the AEI-Brookings Joint Center for Regulatory Studies, there is a 20% chance of a catagory 5 storm hitting New Orleans in the next 100 years. Chances of 3's or 4's is much higher.

The impact of having the Federal Government pay to rebuild and attempt to provide partial protection from future storms is that we ask all taxpayers to subsidize the choice of those who want to live in a city that is below sea level.

This doesn't seem right to me. These billions (last estimate I saw was $9.5 billion to build better levees and somwhere north of $35 billion for rebuilding) could be spent in ways that help many more people. Plus, it appears that the city faces enevitable flooding at some point in the future.

I hate to approach this like a bean counter, but what's right about taking money away from some poor factory worker in Milwaukee to subsidize the choice of someone to live in New Orleans?

You make good and valid points.

But, not building back New Orleans would be like telling the state of Wisconsin to stop producing cheese! It is much more than the particulars that you raise, as significant as they are.

Here the whole is definitely greater than the sum of the parts. This is New Orleans--jazz, blues, Tulane University, the French Quarter, Andrew Jackson, an entire slice of American history and Americana.

Beyond that, we don't have to choose between the factory worker and the ciy. We can respond to both issues well if we choose to do so.

As to living below sea level, what would the world be like without the Netherlands? Amsterdam? Holland?

By the way, take a look at http://costofwar.com/index.html.

Larry,
That's a pretty cool link... I especially like the one for scholarships.

Although,now that I think about it, that link is pretty depressing...

I was yelling in joy when they blocked that punt and scored the TD at the beginning of the game. One of the Falcons was right when he said "All of America is rooting against us." I like the Falcons fine, but this was New Orleans night and it was only right that they won.

Here's hoping that the city continues to thrive and win in the coming months and years.

No, it would be like telling the State of Wisconsin that we weren't going to pay them billions to make cheese that would otherwise have to sell for $10,000 an ounce - and that only 500,000 people eat.

I think this is more akin to riding a motorcycle without a helmet. Not too smart, but OK with me if you want to. However, don't expect the rest of us to pay all of the medical bills that result from your willing choices.

This is not about subsidizing bad choices. This is about rekindling the spirit of New Orleans, which has played a greater role in shaping the best parts of our country's musical and artistic legacies than almost any other city.

Why are we rebuilding New York City? The chance of it being attacked again within the next 100 years is far greater than 20%.

Why do we provide medication to a dying person? That only delays the inevitable.

Why take a breath at all? We're all going to die someday.

This is about caring for our neighbors whose homes were destroyed, and whose spirits are in need of healing.

This is about being part of a community.

The government has lost interest in both Katrina and Rita re-building. Right here in Texas in the midst of a heated governors race - how many candidates toured the Texas uplands coastal area on the Rita one-year anniversary? NONE. Same is true in New Orleans as well. Far too few consituents care - so they don't care, and the poor keep living in FEMA trailers.

I live on the Gulf Coast, and we lost our home in Katrina. We now live in a different (and safer) house in the same city, thanks to the grace of God flowing through someone in a distant state who didn't know us before the storm (not Wisconsin by the way!).

I'm originally from a part of the country known as "twister alley." The thought of running from hurricanes to tornadoes isn't the most comforting thought. The whole country faces potential disaster. Some are more obvious than others (e.g. New Orleans).

The question on the table (posed by Larry) is whether we as a country will do our part to make those places (and people) safer.

To make it happen, it will take (a) money/commitment to care for everyone in our nation, and (b) a feeling of brotherhood (i.e. poor factory workers in Milwaukee and poor artisans in New Orleans).

We need to address both. Larry, I'm thankful for people like you who do so.

I am a big fan and even financial supporter of CDM, but...

You refrence to the cost of war is absurd and ridiculous. Not to mention irresponsible, in this context.

Stick to the inner city my friend you are good at that.

I also think it's oversimplified, but how is it irresponsible? I've deleted my next sentence and retyped it several times, but it all involves assumptions of what you mean, so I'll wait for your reply.

I think it is irresponsible to, even imply, that had we not spent money on the war, we could have done better at rebuilding N.O. The two are not mutually exclusive.

If we want to weigh costs;
1. What would another terror attack cost this country (financially and morale)?

2. What does it cost the citizens of Iraq to have lived under a brutal regime of torture and poverty? I make no assumptions of perfection in Iraq, but for the first time in a long time...there is hope for a future.

I am in no way suggesting that we not rebuild N.O. But to wait on the Federal govt or a Marshal Plan seems like pipe dreams. If it is to be done, it will be done by business and economic revitalization not govt programs. And to imply that if the govt was focused on the war in Iraq or spending money there N.O would be better off...is in my mind irresponsible.

Jarod, why is it "absurd" and "irresponsible" to ask hard questions about national spending? I've been a reader here for a while now and I see people doing it all the time--blasting any notion of the government spending money on any social efforts. Why is it off limits to ask about the cost of Iraq?

Larry, I think you simply directed us to an interesting site. Thanks for doing so.

"Stick to the inner city my friend you are good at that."

This is one of the most demeaning comments I've read here in a long time. How can he possibly do his work without questioning the investments of our government? Larry has mentioned that CDM gets a lot of bucks from the government. Of course he should question them! Money wasted in Iraq is money that was not spent in New Orleans.

It's also money that was not spent in inner city Dallas.

They are mutually exclusive, particularly when the current administration is so obsessed with lowering taxes. There's just not enough money.

It's good you support CDM. I do, too. I sent them a check for their hunger day. And for the blog campaign.

I am also gonna send in another check today, to thank Larry for being a voice for the poor.